The passage I (stupidly? definitely randomly) chose for my Storytelling class is an interesting one.

Here is the passage in McLuhan's << The Medium is the Massage >> book, with the text reversed. 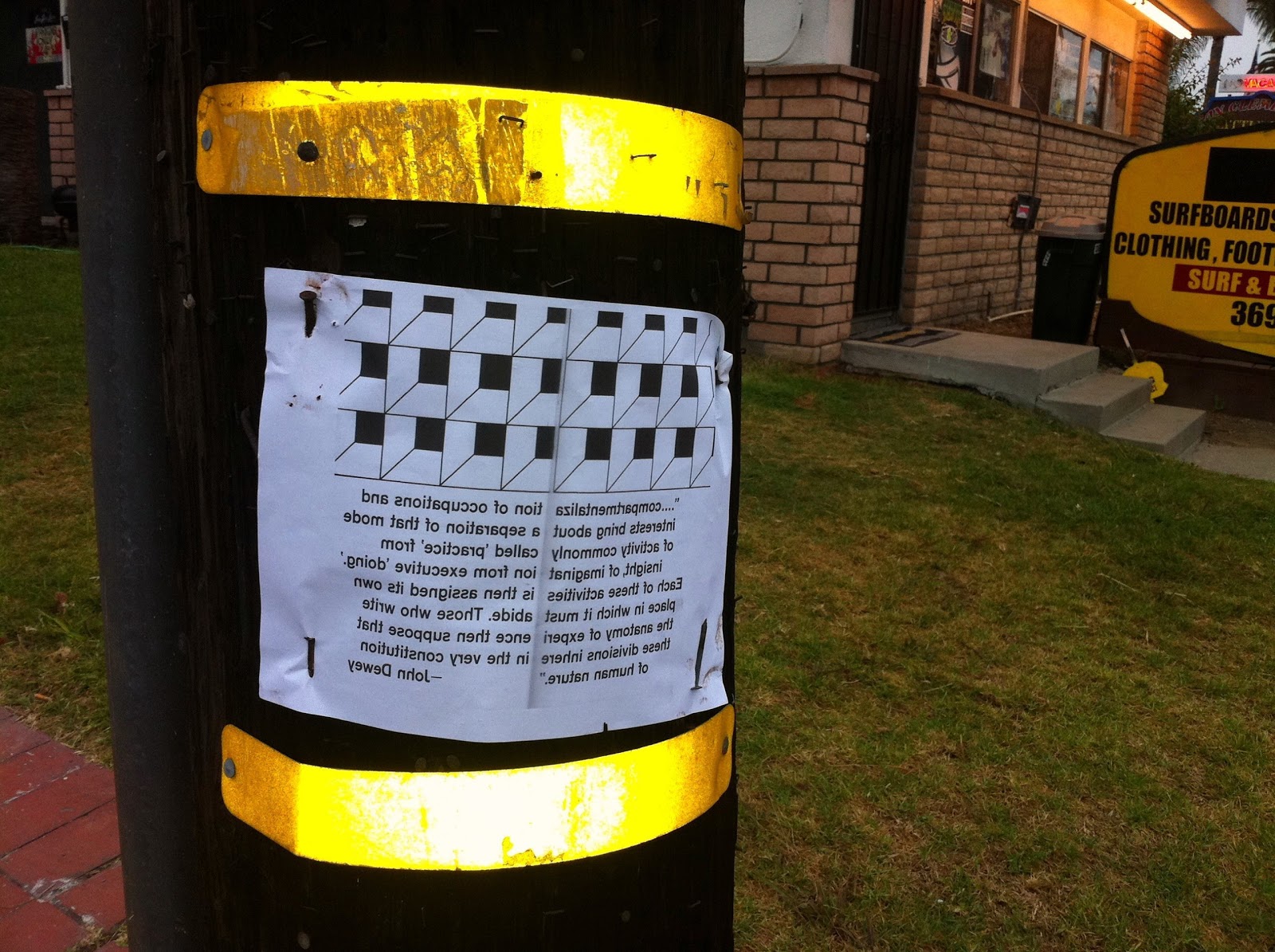 And while you should try to read this backwards - there is a unique childlike quality I found in sounding out the words that contrasts with what is a dense, multi-clause sentence that is dealing with a weighty observation - the image provides a great support of the idea, with the identical boxes representing the compartmentalization and standardization of modern economies.

Here is the John Dewey quote in standard English left-to-right: 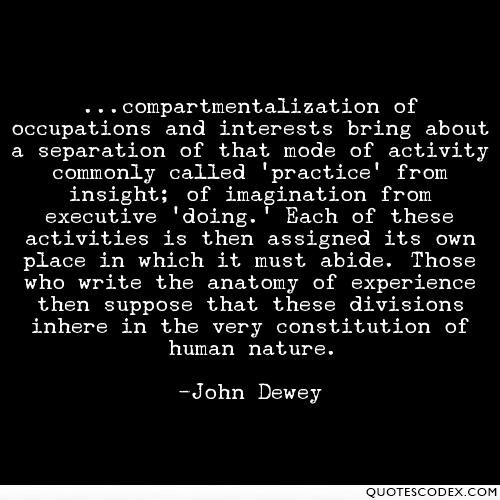 I think the idea is that we have these specializations called jobs. We have a mental separation between our job tasks and our hobbies. Here Dewey uses practice in the medical practice sense though the practice-as-preparation works as well in saying we even lack insight in these job tasks, and see a split between a task we do and the act of imagination.

I think even these are not enough. It is not merely daydreaming that we lose in having a job where we are paid for our time. The sense of fun and of play are lost in jobs. We have an occupation, which is a fascinating word to use, with a sense of having been conquered and kept under a tight watch, threatened with violence. And occupation fits in with the phrase 'occupy my time' - its almost a shorthand for a lazy waste of time, a haphazard chancing on an activity whiling away our days. It is a thing we choose but passively, because we have to, or can't imagine the alternative, huge reserves of time to draw down and spend.

Then Dewey goes on to note that people find this split of fun and work, hobby and profession, imagination and discrete tasks, to be natural, implying it is not.

Here I disagreed. I think there is a natural split between the mind engaged with repetitive tasks and the mind when it is freewheeling. Neuroscience has uncovered diffuse and focused thinking, with very different brain behaviors. I think it is reasonable to think that there is a difference between the mind of one on a hunt (or being hunted!) - monomaniacal, hyperfocused, survival at stake - and the mind of one in safety, engaging with one's tribe, performing mundane tasks (basketweaving, cooking, chatting) that don't require the intense focus born of stress. The compartmentalization is natural. We have focused and diffused thinking, and focused thinking is imagination-less and not as creative.

However, the unnatural bit where I circle back to agree with Dewey's general thrust is that there is no reason a job has to have the focus and stress of a hunt on the Serengeti. In fact, even a mundane, rote job should have moments for diffuse thinking, moments for creativity, moments to let the human brain recharge and refocus. Keeping human minds on the same tasks indefinitely leads to inattention over time which leads to accidents and mistakes. Simple breaks every couple of hours helps, but the 'A Mind for Numbers' book seems to recommend a Pomodoro technique of 25 minutes of focus and 5 minutes of diffuse thinking.

To explore my game that argues with the great John Dewey and also McLuhan by extension (though is an included quote without direct contextual commentary an endorsement?) just click here

Ultimately, to prove my point, I made a video game - fun! - that allows you to unscramble words reversed in the exact way that the page is reversed in the book - right to left and then 180 degrees. This produces the child-like sensation of sounding out works and guessing, though the words are generally 10 letters long which is substantially more sophisticated than Dr Seuss. Some of the words are obvious, and many are compound words that can be teased out even if there meaning is confusing.

In addition, I created a 5 second timer which restricts not just the guessing time but the brain activity. There is, as McLuhan would approve in terms of demonstration, no time for much imagination or fun. The puzzles appear rapidly and relentlessly. There is little quarter given for users who are graded not on points, with the infinite possibility of accumulation, but on accuracy, where one can never truly achieve 100% again once it is lost.

The game has two tiers of feedback. Above 90% accuracy, there is a positive reinforcement and encouragement from a man extending a hand. From 90-80% there is a randomized image of a crooked CEO, from Dick Fuld to the Unabomber, tsk-tsking the player. This is designed to remind the player about the winners and losers in the modern economy, and the deificiation of the executive that makes admitting mistakes impossible in many organizations.